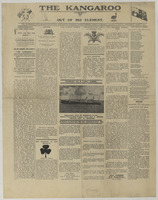 Abstract: The newspaper, called ‘The Kangaroo’, was produced on board the troopship HMAT Afric, which carried men of the 1st battalion Australian Imperial Force (AIF), from its departure from Sydney on the 19th October 1914 until its arrival in Alexandria, Egypt on the 3rd December 1914. The newspaper was edited by Walter Wade, an Irish-born soldier in the AIF. This collection represents twenty-three issues of the paper, comprising of most issues published, along with variant editions and duplicates. There are gaps in the daily publication record, but this collection does have copies that are absent from other nationally significant holdings of ‘The Kangaroo’ extant in Australian libraries.

Original version
Troopship Afric
Date issued: 1914
Type of Resource
text
Physical description
23 issues
Physical medium: Most issues are printed on paper. Issue nos. [1], 10, 16, 25 are printed on cloth (mainly cotton, one is silk). No. 25 is printed in red ink.
Physical description: Originally bound together in a folder, the issues were disbound for digitisation and rehoused in conservation grade materials.
Biographical/historical information
The troopship HMAT Afric left Sydney with men of the 1st Battalion on board on the 18th October, 1914. It was bound for Albany, in south-western Western Australia, where troopships from across Australia and New Zealand were assembling. Having successfully gathered, the convoy of 36 Australian and New Zealand troopships and three escort ships left Albany on the 1st November. The route to Europe via the Cape was changed at the last minute so that the convoy headed for the Suez Canal. En route one of the escort ships, HMAS Sydney, intercepted and sank the German light cruiser, SMS Emden, which had been a source of constant concern for the convoy since leaving Albany. HMAT Afric arrived at Aden on 27th November, and was in Port Said by the 2nd December and Alexandria by the 3rd December. The 1st Battalion disembarked on the 8th December and spent many months training in Egypt until they were deployed as part of the second and third wave of landings at ANZAC Cove on the Gallipoli Peninsula on the 25th April, 1915. The battalion also participated in the famous battle at Lone Pine in early August, 1915. After the evacuation of the ANZAC troops from the peninsula on the 19th December 1915, they transferred to the western front in France and Belgium.
Biographical/historical information
Walter Wade was born in Waterford, Ireland and enlisted in the 1st Battalion of the AIF on 4th September, 1914. He was a 23-year-old journalist, single, living in a boarding house in Stanmore, a suburb of Sydney, before taking up the role of editing the shipboard newspaper for the 1st Battalion, ‘The Kangaroo’. The Australian military records provide some details on Wade’s exit from the Battalion. Wade’s service record includes a note dated 12/12/1914, ‘deserted at Mena camp, Egypt’. Mena camp was 10 miles from Cairo. A brief inquiry was convened in early January 1915. Family history indicates that he made his way to the USA, where he married and had a family.
Scope and content
The publication of on board newspapers was a tradition established from the very beginning of the 1914-1918 war. These newspapers were produced on troopships carrying soldiers of the Australian Imperial Force (AIF) heading to North Africa and Europe and were later adapted to land-based publications once troops were onshore. The first edition of ‘The Kangaroo’, which is not in this collection, was published on the second day of the voyage, the 19th October. This collection begins from No. 2 published on the 20th October. The last edition in the collection is dated 26th November, the day before arrival at Aden. The battalion history notes that ‘After the voyage the printer found his occupation gone, and having no taste for soldiering, promptly deserted’ [p.17]. The collection is historically significant because of the light it sheds on shipboard newspapers during the 1914-1918 war, and one of their editors. The collection is also noteworthy as it contains a virtually complete run of editions from 20th October, 1914 to 26th November, 1914. There are gaps in the daily publication record, but this collection has copies that are absent from other nationally significant holdings of ‘The Kangaroo’ extant in Australian libraries. The collection contains 42 issues of the journal: 23 unique issues and 20 duplicates. All duplicates have been scanned for completeness and to enable comparison between duplicates. There is no content difference between the duplicates, there may be difference in composition or typesetting, differences in impressions, or differences in printing material.
Numbering/sequence
Numbering is incomplete or erratic for some issues: The first issue in unnumbered and dated "October, 1914". Issue for Oct. 28 is unnumbered; both Oct. 29 and Oct. 30 are numbered "10".
Ownership/custodial history
Kindly donated to UCD Library Special Collections by Frances Gillen, in 2015, on behalf of her father, John P. C. Goff. Frances Gillen is the grand niece of Walter Wade who edited the Kangaroo.
Languages
English  eng
Genre
Journal
Subject
Afric (Troopship) --Periodicals
Ship newspapers   linked data (lcsh)
World War, 1914-1918--Australia--Periodicals
Australia. Australian Army. Australian Imperial Force (1914-1921). Infantry Battalion, 1st --History--World War, 1914-1918
Location
http://dx.doi.org/10.7925/drs1.ucdlib_45927
Location
UCD Library. UCD Library Special Collections . W1.E.7
Suggested credit
"The Kangaroo," held by UCD Library Special Collections. © Various copyright holders - see individual records. Digital content by University College Dublin, published by UCD Library, University College Dublin <http://digital.ucd.ie/view/ucdlib:45927>
Funding
The digitisation of this collection was funded by the Australian Embassy in Ireland.
Record source
Description compiled by staff of UCD Library, University College Dublin based on information provided by Prof. Erik Eklund. — Metadata creation date: 2016-02-29

The Kangaroo is licensed under a Creative Commons Attribution-NonCommercial-NoDerivatives 4.0 International License.