Maxwell writing to Asquith about the death of Francis Sheehy-Skeffington 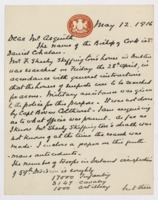 Holograph letter from Maxwell, Headquarters, Parkgate, to Asquith on the death of Francis Sheehy-Skeffington. Also provides a breakdown of the number of troops in Ireland, excluding the 59th Division.

Typescript copy of despatch from Maxwell, Headquarters, Irish Command, Parkgate, Dublin to Lord Kitchener concerning the execution of Francis Sheehy-Skeffington by Captain J.C. Bowen-Colthurst, and other less serious incidents, due to the inexperience and 'jumpiness' of the British troops. Also reports on the progress of mobile columns dealing with 'Sinn Feiners and Citizen Army' members around the country and general reaction in Dublin to the Rising. 'I have done nothing vindictive, but the list of casualties suffered by the Army, Police and Civilians is sufficiently convincing of the serious nature of the rebellion, and had it not been promptly dealt with, and had the rebels been able to seize, acquire or produce more arms, the rebellions would have assumed a much more serious character and I doubt if Redmond & Co. would have been able to keep the National Volunteers from joining in'. Includes a 'Short History of rebels on whom it has been necessary to inflict the supreme penalty'.