Typescript communication from Frank Hall, M.I.5, War Office, London SW to Brigadier-General R. Hutchison, D.S.O, G.H.Q, Dublin marked 'Secret and Personal'. Reports that 'all is well in the North'. Discusses suspected spies, including 'a known German agent, .. We find .. is a Sinn Fein suspect and the son of an old I.R.B. suspect ...'. Reports that he has learned from one correspondent who was caught in Malahide on Easter Monday that 'From what he saw and heard the general bulk of the people about that district, especially up towards Swords were merely waiting for the slightest sign of success on the part of the Sinn Feiners in Dublin to join the rebellion although they are credited with Redmondite loyalty'. Comments on the forthcoming Casement trial. Mentions meeting General Hackett Pain (sic) and Commissioner Smith. 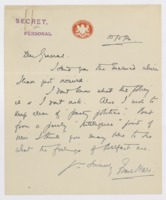 Handwritten letter from Frank Hall, War Office to Maxwell, marked 'Secret & Personal'. Sends 'the enclosed' and comments 'I don't know what the policy is & I don't ask' and wishes to 'keep clear of "party politics"'. 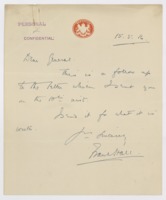