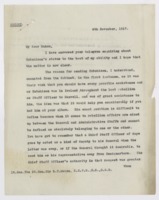 Copy of typescript letter from [?] to Sir Brian T. Mahon marked 'secret'. Letter concerns Hutchison's status, commenting on his usefulness to Maxwell and discusses the anomalies of the Irish situation.

Typescript report: 'Secret: Notes on Conference Held at Headquarters, Irish Command, Parkgate, on November, 6th, 1917'. Conference was held 'with a view to a discussion on the situation in the Country generally and especially with regard to the latest instructions…from the Government'. Attended by General Mahon, Major General R. Hutchinson [now Director of Organization, War Office] and Commanding Officers of different districts.