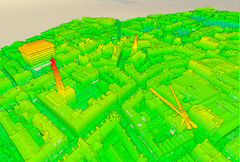 Aerial laser scanning (ALS) data collected over an area of around 1 square km in Dublin city in 2007 (see satellite image). A total of ~225 million points were acquired for a dense urban neighbourhood. ALS was carried out by contractors using FLI-MAP 2 system. The system operated at a scan angle of 60 degrees, with an angular spacing of 60/1000 degrees between pulses. The FLI-MAP 2 system also provides spectral data in two different forms: (i) intensity and (ii) colour. An intensity value is provided for each point while colour information is provided by cameras acquiring images during the flyover and is transferred to scan points. The flying altitude varied between ~380-480m, with an average value of ~400m. Total 44 flight strips were acquired and 2823 flight path points were recorded, providing instantaneous aircraft position over time.