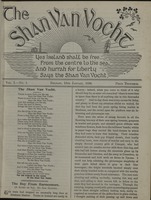 The Shan Van Vocht was a national monthly magazine founded in 1896 by two Belfast women, Alice Milligan and Anna Johnston (later Anna MacManus) following their departure from another journal, the Northern Patriot. The Shan Van Vocht contained literature, poetry, historical articles, and political commentary, as well as news and events of various cultural and political societies. Poetry and prose in Irish were included, occasionally with an English translation. As the centenary commemorations of 1798 approached, many issues included articles, short stories, oral histories, and poetry relating to the United Irishmen’s rebellion. Alice Milligan is listed as the editor and Anna Johnston as the secretary in most issues, but in practice the two are believed to have acted as co-editors. Both women also wrote for the journal; Anna Johnston, often under the name ‘Ethna Carbery’, and Alice Milligan, sometimes under the name ‘Iris Olkyrn’. James Connolly, Douglas Hyde, and Arthur Griffith were among those who contributed to the Shan Van Vocht. The journal also featured writings by P. J. McCall, Lionel Johnson, T.W. Rolleston, John MacNeill, William Rooney, Michael Cusack, Thomas Concannon, Alice Furlong, Nora Hopper, and Seumas MacManus under the pen name ‘Mac’. In 1899 the Shan Van Vocht ceased publication and the subscription lists were transferred to Arthur Griffith’s United Irishman.

A collection of mainly 19th century maps of almost 150 cities, towns, and villages in the Republic of Ireland. Most are Town Plans which were surveyed at either five or ten foot to one mile scale between 1837 and 1896. The remainder were produced by enlargement of the 1/2500 maps between 1892 and 1911.