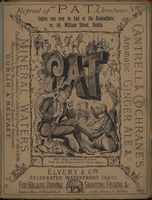 Pat was an Irish three-penny weekly satirical periodical, published and printed in Dublin by W. P. Swan. It was founded in 1879 by political cartoonist and illustrator John Fergus O'Hea, and writer and editor Edwin Hamilton. Hamilton and O'Hea had previously worked on the comic magazine Zozimus, the magazine Ireland's Eye, and the weekly newspaper Zoz. Pat was edited by Hamilton, with illustrations provided by O'Hea and other artists. Publishing ceased temporarily from September 1880 until January 1881, when O'Hea was joined by cartoonist Thomas Fitzpatrick. A summary printed in a number of issues describes the content as "artistic, literary, humorous, satirical… Each number contains, printed in several colours, one double page cartoon and one or more full page cartoons, besides numerous uncoloured sketches and minor illustrations. The literary matter, supplied by Irish writers of recognised ability, will treat of current events, not only in Dublin, but in all parts of Ireland". Regular features included a diary of the character Pat, reports on theatre productions in Dublin, descriptions of Dublin streets and areas, and travel notes from around Ireland and London. The illustrations cover many of the major political, social, and cultural issues of the period. Pat ceased publication in March 1883 and was followed by the short-lived magazine The Irish Diamond. (Based on information from the Dictionary of Irish Biography and Irish Comics Wiki)