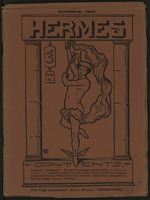 Hermes was a literary journal for the staff and students of University College, Dublin. The first issue stated that the periodical "would not seek to be a semi-political organ of the student body, but would publish essays, poems, and reviews ... written either by the professors and students of the University or by their friends". The magazine also welcomed contributions from all the colleges of the Royal University, including the then Queen's Colleges in Belfast, Cork, and Galway.

St. Stephen's was a University College Dublin magazine started in 1901. The contributors and editorial staff included names that would later become important figures in Irish literary, political, and educational circles. Initially edited by Hugh Kennedy, the magazine was subsequently edited by Felix Hackett, Thomas Kettle, Constantine Peter Curran, John Kennedy, and Francis Cruise O'Brien. Contributors were mainly staff and students of the University, among them James Joyce, Patrick Pearse, Francis Sheehy-Skeffington, George Sigerson, and Patrick J. Little. The magazine was issued monthly during term. The magazine ceased publication in May 1906, but was re-started in 1960. This collection covers the initial volumes from 1901-1906.