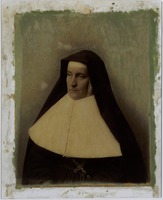 The M. Michael Corcoran’s Photograph Albums contain photographs taken by Mother Michael Corcoran IBVM (1846-1927), Superior General of the Loreto Sisters. M. Michael was a self-taught photographer who used her camera to capture religious sisters, ministries, pupils, employees and friends of Loreto communities in Ireland and across the world. In 1902, M. Michael became the first Superior General to undertake a visitation of the IBVM communities in India and Australia and her photographic collection consists mainly of images captured during this international visitation. The albums also include images of Loreto Abbey, Rathfarnham taken in 1905 and images of Loreto Convent, Balbriggan taken between 1906 and 1907. Her albums should be of interest to anyone interested in M. Michael Corcoran IBVM as an educator or as IBVM Superior General, researchers interested in early 20th century photography, local history, early 20th century convent or school life in Ireland, and in foreign provinces.