Handwritten dairy with details and military campaigns, life at the Front, deaths of soldiers.

Handwritten diary of events of World War I, written while Gleeson was based at Bethune, France. It contains details of his ministry, as well as details of military events and life at the Front. 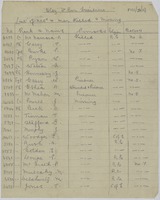 Handwritten diary with details of life at the Front, military campaigns, soldiers Fr. Gleeson met and much more. Newspaper cutting in diary regarding activities in Neuve Chapelle. 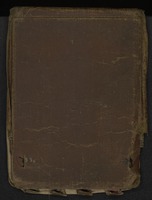 Handwritten lists of soldiers, with their numbers, rank, name and address. There is a section for comments. 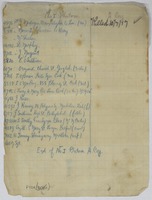 Handwritten list of men killed in June 1917, including Platoon number and Company Letter, name, address and next of kin, in some instances. 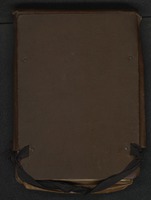 Page from a diary of Fr. Francis A. Gleeson

Handwritten page from a diary of Fr. Gleeson, noting the death of Barsby, ‘who died a very holy death’ (p1). It also discusses the purchase of crosses for graves and the making of coffins.

Handwritten pages from a dairy. 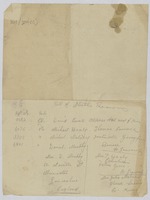 Fr. Gleeson writing about celebrating mass in a Nyssen hut

Handwritten notice of Fr. Gleeson, referring to the celebration of mass in a Nyssen hut, marking the Feast of the Presentation. 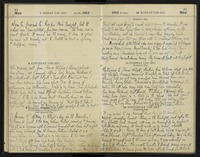 A collection of papers belonging to Fr. Francis A. Gleeson relating to his time as Catholic Military Chaplain to the 2nd Battalion Royal Munster Fusiliers during World War I. The papers include diaries detailing life at the front and religious activities, Brigade Rolls listing mainly Roman Catholic soldiers, and correspondence from the families of men missing or killed in action.

Letter to Fr. Gleeson from Mary McEvoy, 12 South View, Chester Street, Durham, England. Her mother was happy to know that Private (T. or J.?) McEvoy received communion before he went missing in action. The McEvoy family have learned of the death of another brother, who was also at war. They are hopeful that McEvoy is alive. 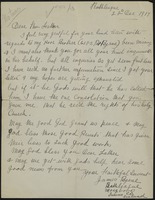 Letter to Fr. Gleeson from James Byrne, Rathleague, Maryborough [Portlaoise], Queen’s County [Laois]. His brother, Private Byrne, 6182, is missing in action and all enquiries to date have been fruitless. He thanks Fr. Gleeson for his work. 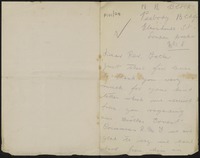 Letter to Fr. Gleeson from Mr. & Mrs. Crimmins, 18 B Block, Peabody Buildings, Glasshouse Street, London Docks, thanking him for his kind correspondence regarding their brother, Ernest. He is wounded, but not badly, and is a prisoner in Germany.

Letter to Fr. Gleeson from Margaret Burke, Church Street, Listowel, County Kerry. She received the letter on the Feast of the Nativity concerning her husband Private Burke, 3591, but there is still no news regarding him. She fears the worst and states that ‘my heart is broken’ (p2).

Letter to Fr. Gleeson from Thomas Casey, Ballyshane, Doneraile, County Cork. Nothing has been heard from Sergeant Casey, 6906, but they are still hopeful. 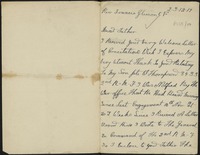 Letter to Fr. Gleeon from Mrs. E. Thomspon, 21 Harpur’s lane, Cork, thanking him for information regarding the death of her son, Private W. Thompson 8433, 2nd Royal Munster Fusiliers. He had been missing since 10 November and she asks Fr. Gleeson to find out the details of his death. 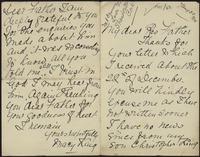 Letter to Fr. Gleeson from Mary King, 1 Drummy’s Lawn, Shandon Street, Cork, thanking him for his letter regarding her son, Christopher. No one has heard from him or about him.

Letter to Fr. Gleeson from Margaret Maughan, Greenhills, Garryowen, County Limerick, thanking him for the information relating to the death of her son James. She is grateful that he died a happy death. She pays tribute to Fr. Gleeson for all his work.

Letter to Fr. Gleeson from Mrs. Roger Campbell, 171 Menard Street, Firfield, Glasgow, thanking him for his interest in her son, Private William Campbell, 6934. He is one of four brothers in the army, two of whom she has not seen since they went to war in August 1914. The youngest is in Germany since 31 October 1914. Another son, part of the 16th Irish Division is wounded. She states her son ‘Willie’ spoke very highly of Fr. Gleeson.