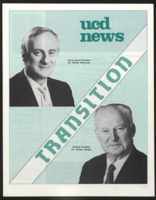 Abstract: UCD News was an internal, informal publication published initially by the Information Officer and later by the Office of Public Affairs for the staff and students of University College Dublin. It's aim was to be an informal news magazine rather than an official publication and a typical issue included general news and notices from around the University, news from clubs and societies, correspondence, and appointments. Includes articles on the new President, Patrick Masterson and a farewell to the former President, Thomas Murphy.