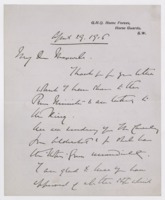 Abstract: Holograph letter from Field Marshal Viscount French, Commander-in-Chief of Home Forces, G.H.Q. Home Forces, Horse Guards, S.W., to General Maxwell following Maxwell's appointment as Commander-in-Chief of British Forces in Ireland, on his talks with Sir Edward Carson and John Redmond. Also remarks 'I don't think there is much chance (now) of a German landing on the west coast of Ireland but that is what we must be prepared for'. Also relates the King's views on the Rising.