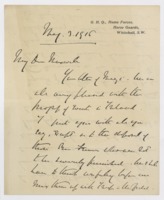 Lord French writing to General Maxwell referring to the executions of Pearse, Clarke and MacDonagh

Abstract: Holograph letter to General Maxwell from Lord French in which he refers to the execution on that day of Pearse, Clarke and MacDonagh, "The P.M. expressed himself as 'surprised' at the rapidity of the trial & sentences. I pointed out that you were carrying out your instructions exactly & correctly and in strict accordance with Military and Martial Law. He quite understands but asked me to warn you not to give the impression that all the Sinn Feiners would suffer death. I told him that the fact of 3 of them having been awarded a much less severe sentence was evidence enough of the attitude you were adopting towards them and that I thought it much better to [leave] you [alone] to your own discretion. He agreed to this…".

Lord French writing to General Maxwell referring to the executions of Pearse, Clarke and MacDonagh is licensed under a Creative Commons Attribution-NonCommercial-ShareAlike 4.0 International License.