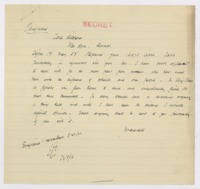 Abstract: Handwritten paraphrase copies of cipher messages from Maxwell to Kitchener, War Office, London marked 'Secret' concerning the North King Street massacre. Includes Kitchener's cipher 16970 questioning the reports of what occurred and outlining the scenario he considers more likely. Maxwell agrees but has 'sworn affidavits to deal with for the most part from women who have made them under the influence of solicitors and other people. In King Street the fighting was from house to house and exceptionally fierce the streets being barricaded.' Includes message from Maxwell to Asquith reporting that members of the press were shown the conditions in Richmond Barracks.