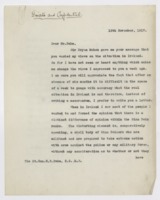 Major General R. Hutchinson writing to H.E. Duke about the situation in Ireland

Abstract: Edited typescript copy of a letter marked 'Private and Confidential' from Major General R. Hutchinson to the Chief Secretary for Ireland, the Right Honourable H.E. Duke, containing Hutchinson's 'views on the situation in Ireland' in which he distinguishes and comments on the differences between extreme and moderate members of Sinn Féin; discusses police and military action with respect to drilling and/or assembly by members of Sinn Féin; the trial of 'Sinn Feiners' before courts martial and the proclaiming of Sinn Féin meetings. Includes handwritten annotations and corrections.

Major General R. Hutchinson writing to H.E. Duke about the situation in Ireland is licensed under a Creative Commons Attribution-NonCommercial-NoDerivatives 4.0 International License.