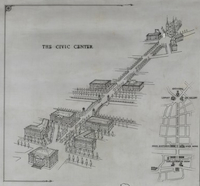 The Dublin Town Planning Competition was held in 1914, with the aim to "elicit Plans and Reports of a preliminary and suggestive character, and thus obtain contributions and alternatives which may be of value towards the guidance of the future development of the City in its various directions". The Dublin civic survey report refers to the competition as the Aberdeen Competition, probably due to the prize for the best design which was presented by the Marquis of Aberdeen and Temair. Eight entries were submitted in total, each relating to the Greater Dublin area, taking in Howth, Glasnevin, Ashtown, Dundrum and Dalkey. The main headings for the proposals included: 1. Communications; 2. Housing; and 3. Metropolitan improvements. The submission by Patrick Abercrombie, Sydney Kelly and Arthur Kelly was awarded the prize in 1916. Due to major political and historical events, the winning entry was not officially published until 1922, with the final Civic Report not published until 1925. Out of the eight entries, only three are known to have survived.