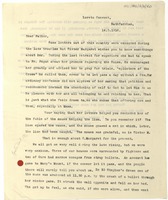 Abstract: Letter from M. Michael Corcoran, Loreto Convent, Rathfarnham to Fr. Ryan S.J., Australia. This letter, refers to the 1916 Rising in Dublin, where three Loreto houses were surrounded by ‘fighters and two of Ours had narrow escapes from stray bullets.’ A member of the community at 53 Stephen’s Green, was awoken at 11.30 p.m. ‘by the crash of a bullet through her window pane. It struck the wall opposite and fell on her bed.’ She did not alert the rest of the community, ‘assuming, it maybe supposed, that a second stray bullet would not come the same way.’ She fears what will ‘become of our poor country’, and although she hopes peace will soon be restored, ‘many fear disaffection among the Irish regiments.’ The three houses in Dublin ‘were in great danger, but all Ours kept up their courage wonderfully, and kept at the back of the houses to avoid bullets.....The house on the north side had not enough to eat for a short time.’

Origin information
Dublin, Ireland
Date created: 2016-05-14
Type of Resource
text
Physical description
[2] p. on 1 leaf
26 x 22 cm
Condition: Some text bleed through and creasing on bottom left corner.
Biographical/historical information
Frances Corcoran was one of four children born to Michael Corcoran, barrister and Anna Maria Magan. She was born on 5 July 1846. Frances was a pupil of Loreto Convent, 43 North Great George’s Street. In 1865, Frances entered Loreto Abbey Rathfarnham and became known in religion as M. Michael, making her final profession in 1867. M. Michael held the offices of Assistant to General Superior, Mistress of Novices and General Consultor, before she was elected Superior General on 25 August 1888. She was re-elected Superior General again in August 1894, August 1900, July 1907 and July 1913, serving five terms in total. M. Michael Corcoran died in Loreto Abbey Rathfarnham on 27 May 1927, aged 80 having spent 62 years in religious life. Her five terms in office were characterised by her commitment to education, the recognition of Mary Ward as foundress, the movement towards the union of the global Institute, the drafting & the approval of Constitutions in 1913, the confirmation of a system of central government which saw the canonical erection of Provinces in 1911. She was the first Superior General to undertake visitation of the foreign houses, and from 1902-1904 visited the branch houses in India, Australia and Spain. It was during this visit to Australia that she met Fr. Ryan S.J., with whom she later maintained a correspondence.
Languages
English  eng
Genre
Letter
Subject
Ireland--History--Easter Rising, 1916--Personal narratives
Institute of the Blessed Virgin Mary. Loreto Abbey Rathfarnham --Records and correspondence
Institute of the Blessed Virgin Mary --Spiritual life
Location
http://dx.doi.org/10.7925/drs1.ucdlib_45798
Location
Institute of the Blessed Virgin Mary. IBVM (Loreto) Institute & Irish Province Archives . MC/PRO/6/8/20
Suggested credit
"Letter to Fr. Ryan S.J.," held by IBVM (Loreto) Institute & Irish Province Archives. © Institute of the Blessed Virgin Mary. Digital content by University College Dublin, published by UCD Library, University College Dublin <http://digital.ucd.ie/view/ucdlib:45798>
Record source
Descriptions created by staff of UCD Library, University College Dublin based on a finding aid provided by IBVM (Loreto) Institute & Irish Province Archives. — Metadata creation date: 1916-03-14

Copyright of the original resource: Institute of the Blessed Virgin Mary