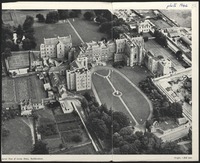 Abstract: Aerial photograph of Loreto Abbey, Rathfarnham showing the farm yard (upper right hand corner of photograph, marked with an x). The Annals Loreto Abbey Rathfarnham 1913-1916 refer to two workmen employed on this farm who participated in the rising. The height from which the photograph was taken is noted as 1,000 feet. The date and title are also written on the verso of the photograph, along with the following note 'farmyard to the right where Stonepark Abbey houses are being erected 1989-1990'.

Copyright of the original resource: Unknown