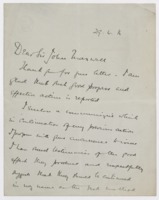 Abstract: Letter from Lord Wimborne to General Maxwell. Wimborne expresses his pleasure at the 'good progress and effective action' reported by Maxwell. The letter refers to an enclosed communiqué which seems to suggest a certain line of action, based on previous action in which the writer was involved. It also indicates that the Lord Chancellor provided a plan of the Four Courts which shows the position of a building in which contained 'all the most valuable historical and proprietory documents in Ireland'. A post script indicates that the letter was delivered in person by Basil Blackwood (Basil Temple Blackwood, 1870-1917), private secretary to the Lord Lieutenant.